Set the maximum allowed temperature rise and the emissions criteria The plot will display the required emissions trajectory after your decline point.

Data
I only used CO2 for this instead of CO2e because I had trouble finding great data on the latter. That means that this is somewhat of a best-case scenario. The CO2 data come from this source. The carbon budgets come from Table 2.2 in this source. The default growth rate is just the effective growth rate over the past decade (~1.3%).

Methodology
This is pretty basic...I take the historical data and plot it up until now. I then take the growth rate and peak year that you select, and come up with the line that yields a total area equal to the remaining carbon budget at that point. This is simple because the area under a line is just 0.5*width*initial y-value (it's a triangle). You could do cooler looking curves (e.g., logistic), but it wouldn't actually tell you anything new so I kept it really simple.

Permafrost
This part is less established than the rest so I defaulted to not including it. When those carbon budgets were created, permafrost thaw was not factored in. The new carbon budgets including it will not be available for some time. Thus, I took an educated guess at it.
I relied on this source: 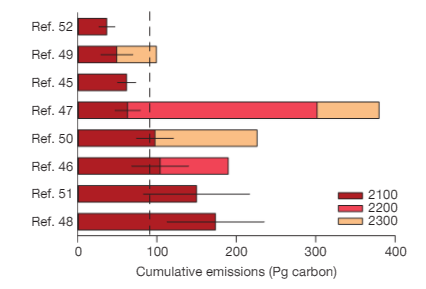 In case that link dies, it's also used here. There are some sources that show a significantly larger release, but since this is so unknown/hypothetical, I went conservative and used this one. This is also a nice aggregate that is heavily-cited in a respectable journal. It's important to note that the x-axis is carbon and not CO2 so you have to convert.

Then, I simply adjust the carbon budgets when you click to include permafrost thaw. E.g., for 2.0 C, it's 1000 in 2011, so I subtract 275 from that and you get 725. My gut is that this is not a horrible guess and is better than not including permafrost at all, but this adds extreme uncertainty so feel free to leave it out.